If you originally wrote your content in Word, you can import the text into InDesign.

To start the import process, go to File > Place. This will bring up a dialog of options (explained below). Once you have selected all the options you want, you click on “OK” to place the text on the page. 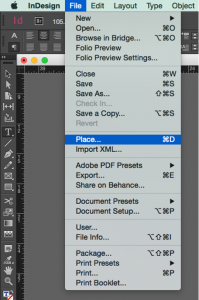 You Can Import Only Text

The import process will not work with images, tables, text boxes, SmartArt, drawings, embedded charts, or anything else except the text. If you need to convert those kinds of objects from Word to InDesign, you will need to either re-create them in InDesign (or another program like Illustrator or Photoshop) or export all the objects separately from Word and import them into InDesign as graphics or other similar objects.

You Must Map Word Styles to InDesign Tags

Or Import the Text Without Styles

If your original Word document does not use styles, or if it uses them badly, you may want to strip all of the visual styling completely before importing the text into InDesign, so that you can apply proper styles and tags with InDesign after importing. One of the easiest ways to do this is to copy all of the text in the Word document and paste it directly into InDesign, bypassing the import options. Just don’t forget to apply the proper styles and tags later.