InDesign’s options for accessible tables are limited. In an ideal world, InDesign would allow you to add column headers, row headers, and create complex tables with multiple levels of headers. Of all of those, InDesign can do only one of them: add column headers. The table below is an example of the type of table you can create in InDesign: 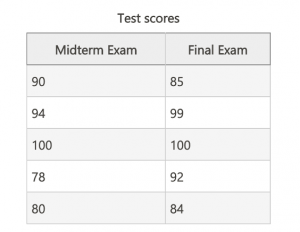 If you need to create a two-dimensional table, for example by adding the names of the people to whom the test scores belong, there is no way in InDesign to designate the first cells in each row as row headers. 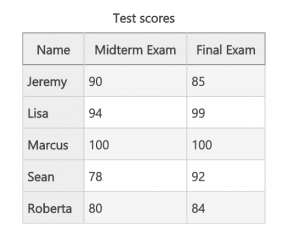 If you needed to create a table like this, you can still create the table in InDesign, but you would need to add the extra accessibility markup for the row headers after exporting to other formats. You would need to edit the tags in Acrobat Pro for PDF files, or in the HTML code for web pages or EPUB files.

With a row of headers in the table, InDesign will create a THEAD tag around the row, and each cell will be designated as TH cells, which is exactly what you want in PDF format.

When you export to HTML, InDesign does not preserve the table column markup, so unfortunately you will need to add it again in HTML after exporting the document. Remember, InDesign is not the ideal tool for creating HTML documents.